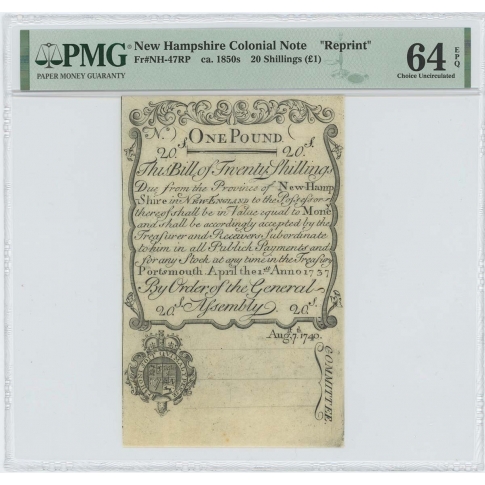 Details
New Hampshire. April 1, 1737. 20 Shillings. c. 1850 "Cohen" Reprint. PMG CU64 EPQ Reprinted from original plates c. 1850 Mendes I. Cohen (1796-1879): Archives of Maryland (Biographical Series) MSA SC 3520-1818 Biography: Mendes I. Cohen was born in Richmond, Virginia on May 26, 1796 to Israel I. and Judith Solomon Cohen. In addition to Mendes, the Cohen family included sons Jacob, Joshua, Solomon, Philip, Benjamin, Joshua I., Edward, David and daughter, Maria. After Israel's death in 1803, Judith Cohen moved the family to Baltimore. Mendes I. Cohen worked with his brothers at Cohen's Lottery and Exchange and later at Jacob I. Cohen, Jr. and Brothers Banking House. He left Baltimore in 1829 to travel abroad. Between 1829 and 1835, he visited England, Russia, Turkey, Palestine, and Egypt, in addition to the majority of countries in Central and Western Europe. He became the first American to tour the Nile Valley. Upon his return to the states, Cohen served as a Delegate in the Maryland General Assembly in 1847, was a delegate to the State Peace Convention during the Civil War, and acted as Vice President of the Baltimore Committee of the Alliance Israelite Universelle. Mendes I. Cohen remained a bachelor throughout his life, and died on May 7, 1879 without heirs. Colonel Mendes I. Cohen: War of 1812 veteran, member of a prominent Jewish family in nineteenth century Baltimore and adventurous traveler. This living history character will portray Cohen as an old man - the last survivor of Nicholson's Artillery Fencibles, sharing the incredible events of his life. Cohen was a fixture around Baltimore into his 80s. He was often seen walking along North Charles and Baltimore Streets and loved to share stories of his adventures, especially the Battle of Baltimore, with friends and passersby. Mendes I. Cohen, born in Richmond, Virginia in 1796 to German Jewish immigrants, moved to Baltimore in 1808 with his mother and siblings. They chose to settle in Baltimore because the city, a bustling port and hub of trade, offered unparalleled economic opportunity. As a teenager, Mendes I. Cohen served at the Battle of Baltimore as one of 60 volunteers in Joseph Hopper Nicholson's Artillery Fencibles in 1814. Decades later, as the last living survivor of his artillery company, Cohen was known to regale Baltimoreans with stories of the famous battle until his death in 1879. But the Battle of Baltimore was just the beginning of many adventures in Mendes Cohen's long life. Other experiences speak to the role he and his family played in helping to build the city of Baltimore, his dedication to his Jewish heritage, as well as his patriotism and particular relationship to the Star Spangled Banner. Cohen's brothers were successful bankers who also ran a lottery which funded many public improvements in Baltimore, including the Washington Monument. In 1821 their lottery venture became the subject of a groundbreaking Supreme Court case, Cohen vs. Virginia, which ruled that federal laws take precedent over state laws and that the U.S. Supreme Court has appellate jurisdiction and final ruling over any national court case. After working in the family business for several years, Mendes I. Cohen spent the 1830s traveling throughout Europe and the Middle East. His adventures included surviving shipwrecks, meeting with foreign dignitaries, attending the coronation of Queen Victoria, trekking by camel through the Sinai desert, and being the first U.S. citizen to visit Jerusalem. Cohen was also the first American to raise the Star Spangled Banner on the Nile River, using a flag he made himself based on his memories of the Battle of Baltimore. An avid Egyptologist and numismatist, Cohen amassed one of America's finest collections of Near Eastern antiquities as well as a world renowned coin collection. The antiquities, later donated to Johns Hopkins University, form the basis of the university's celebrated Egyptology collection. When he returned from his travels, Cohen held numerous positions in government and civic life. He was an aide to Governor Thomas Veazey, served in the Maryland House of Delegates, and was a director in the Fireman's Insurance Company. He also helped to found Maryland's earliest Jewish charity, the Hebrew Benevolent Society. Check out all the great US Coins, Paper Money, Ancients, World and Exonumia at Sarasota Numismatics. We are happy to answer any questions about this or anything in our vast inventory.
More Information
Sarasota Numismatics 2022 | Site by Digital Studio NW