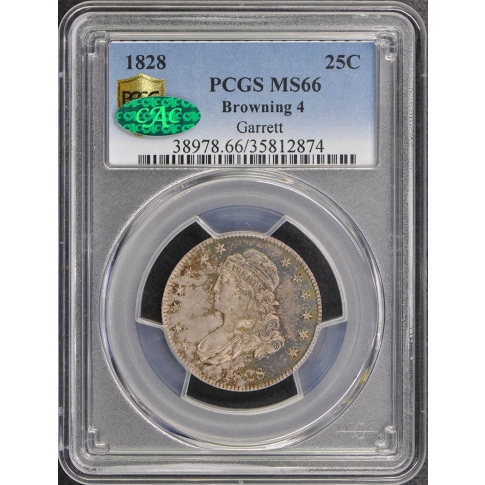 Browning 4 : Star 1 far from bust. Curl Base 2 in denomination.

The Browning 4 die pair was employed to strike not only the half dozen or so Proofs of this date, but also the three finest non-Proof 1828 Quarters. All three of the finest non-Proofs have been catalogued as Proof in the past, as all exhibit finely detailed strikes, near planar reflective fields, and a similar fabric to the recognized Proofs. Whether these immediately followed any intentional Proof strikings in the life of these dies we cannot know.

For over twenty years, I have been an active buyer of the best Capped Bust Quarters. And since the mid-1990’s, my auction notes for every 1828 Quarter have read “Garrett minus X”, noting each coin’s shortcomings in comparison to this Garrett coin. In those twenty plus years, I have never seen another 1828 Quarter that betters this one, and only two which come close.

Here is the Finest Known 1828 Quarter, purchased by T. Harrison Garrett from the Chapman brothers in 1883, and residing in the Garrett collection until its sale at a then record $60,000 nearly a century later. Even without the benefit of provenance, these surfaces are unquestionably original, naturally toned in dominant shades of violet, blue, and pearlescent gray, which give way to flashes of olive, gold, and amber at left, both obverse and reverse. The fields are planar and evenly reflective, with fine die polish lines visible under a loupe. Finally, the strike is uncompromising, including sharp star centers, crisp hair curls, and fully delineated eagle’s claws.

The second finest 1828 Quarter is the former Doug Kaselitz PCGS MS66+ #32210544 sold by Stack’s Bowers in July 2015 at $111,625 to Charles Link. While the PCGS plus grade suffix was certainly awarded for the coin’s vivid rainbow toning, the Kaselitz-Link 1828 Quarter falls short of the striking definition and shows a few marks that are not present on the Garrett coin.

Both this Garrett PCGS MS66 and the Kaselitz-Link PCGS MS66+ are included in the CAC Census as MS66.