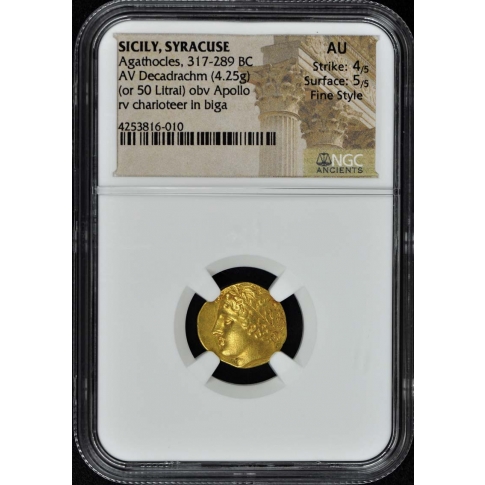 Details
Agathocles was born at Thermae Himeraeae (modern name Termini Imerese) in Sicily. The son of a potter who had moved to Syracuse in about 343 BC, he learned his father's trade, but afterwards entered the army along with his brother Antander. In 333 BC he married the widow of his patron Damas, a distinguished and wealthy citizen. He was twice banished for attempting to overthrow the oligarchical party in Syracuse. In 317 BC he returned with an army of mercenaries under a solemn oath to observe the democratic constitution which was established after they took the city. Having banished or murdered some 10,000 citizens, and thus made himself master of Syracuse, he created a strong army and fleet and subdued the greater part of Sicily. War with Carthage followed. In 311 BC Agathocles was defeated in the Battle of the Himera River and besieged in Syracuse. In 310 BC he made a desperate effort to break through the blockade and attack the enemy in Africa. In Africa he concluded the treaty with Ophellas, ruler of Cyrenaica. After several victories he was at last completely defeated (307 BC) and fled secretly to Sicily. Check out all the great US Coins, Paper Money, Ancients, World and Exonumia at Sarasota Numismatics. We are happy to answer any questions about this or anything in our vast inventory.
More Information
Sarasota Numismatics 2022 | Site by Digital Studio NW