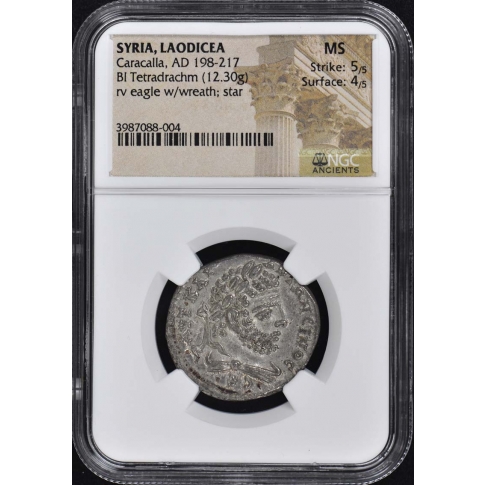 Details
His father died in 211 at Eboracum (now York) while on campaign in northern Britain. Caracalla was present and was then proclaimed emperor by the troops along with his brother Publius Septimius Antoninus Geta. Caracalla suspended the campaign in Caledonia and soon ended all military activity, as both brothers wanted to be sole ruler thus making relations between them increasingly hostile. When they tried to rule the Empire jointly they actually considered dividing it in halves, but were persuaded not to do so by their mother. Then in December 211 at a reconciliation meeting arranged by their mother Julia Domna, Caracalla had Geta assassinated by members of the Praetorian Guard loyal to himself, leading to Geta dying in his mother's arms. Caracalla then persecuted and executed most of Geta's supporters and ordered a damnatio memoriae pronounced by the Senate against his brother's memory. Geta's image was simply removed from all coinage, paintings and statues, leaving a blank space next to Caracalla's. Among those executed were his former cousin-wife Fulvia Plautilla, his unnamed daughter with Plautilla along with her brother and other members of the family of his former father-in-law Gaius Fulvius Plautianus. Plautianus had already been executed for alleged treachery against emperor Severus in 205. About the time of his accession he ordered the Roman currency devalued, the silver purity of the denarius was decreased from 56.5% to 51.5%, the actual silver weight dropping from 1.81 grams to 1.66 grams – though the overall weight slightly increased. In 215 he introduced the antoninianus, a "double denarius" weighing 5.1 grams and containing 2.6 grams of silver – a purity of 52%. Check out all the great US Coins, Currency, Ancients, World and Exonumia at Sarasota Numismatics. We are happy to answer any questions you may have about this or any of our other extensive offerings.
More Information
Sarasota Numismatics 2022 | Site by Digital Studio NW