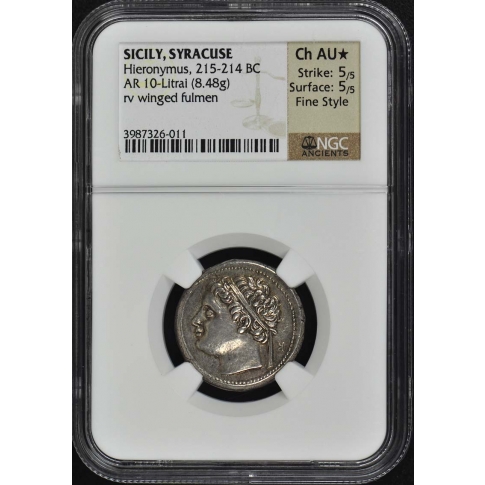 Details
SICILY. Syracuse. Hieronymus (216-215 BC). AR 10 litrae (23mm, 8.48 gm, 5h). Diademed head of Hieronymus left / ΒΑΣΙΛΕΟΣ IΕΡΩΝΥΜΟΥ above and below winged thunderbolt, monogram above. HGC 2, 1567. Holloway 26 (same dies). SNG ANS 1027 (same obverse die). Perfectly struck and beautifully toned. NGC Choice AU ★ 5/5 - 5/5, Fine Style. Hieronymus ascended to the throne of Syracuse at the age of 15 after the long reign of his grandfather, Hieron II, in the middle of the Second Punic War. Hieron had carefully maintained an alliance between Syracuse and Rome, but the Romans had just been massively defeated at Cannae and it seemed Carthage, under the brilliant general Hannibal, was completely victorious but for the formalities. Hieron was thus persuaded by the pro-Punic faction to break the Roman alliance and throw in with Carthage. It proved a fateful move, as Rome recovered from her disasters more quickly than anyone could have foreseen and did not take the betrayal of Syracuse lightly. A Roman army was thus dispatched to Sicily under the great general Marcellus; Hieronymus raised a 15,000-man army and prepared to take the field. However, Hieronymus was assassinated by the pro-Roman faction before battle could be joined. Marcellus refused peace overtures and subjected Syracuse to a terrible two-year siege, ending with a thorough sacking. Later historians blackened the name of Hieronymus, accusing him of engaging in every vice and of bringing ruin upon his people by breaking the Roman alliance. Check out all the great US Coins, Paper Money, Ancients, World and Exonumia at Sarasota Numismatics. We are happy to answer any questions about this or anything in our vast inventory.
More Information
Sarasota Numismatics 2022 | Site by Digital Studio NW